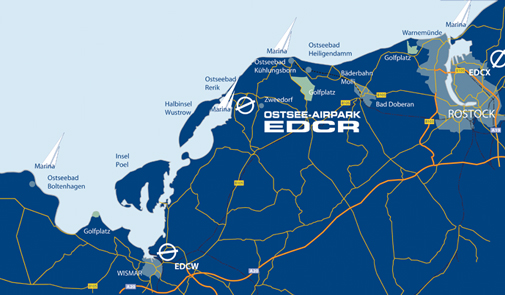 The second largest Hanseatic city in Mecklenburg-Vorpommern Wismar was founded in the early 13th century. The old town of Wismar has been included in the UNESCO list of World Heritage Sites since 2002.

Heiligendamm has been Germanys most elegant seaside resort since its foundation in 1793. It is called White Town by the Sea because of its impressive classicist white buildings, six of which are now the Grand Hotel Heiligendamm.

With an 18 hole championship course and a compact 9 hole course the Golf Resort Wittenbeck offers golf sport for both beginners and advanced players and has a view of the Baltic Sea.

The peninsula Wustrow adjacent to the town of Rerik is approximately 1 km across and 5 km long. It had been agriculturally used until it was bought by the German Armed Forces in 1933. After WWII it served as a Russian outpost during the Cold War. In 1998 fund managers Fundus bought Wustrow intending to establish another seaside resort including hotels, a marina and a golf course. Since 2004 the peninsula has been closed to the public, the biggest part of it is a nature resort.

Kühlungsborn is the largest seaside spa town in Mecklenburg. There is an elongate beach and promenade and a marina with many restaurants.

Rerik is situated on the Baltic Sea coast about 4 km north of the airfield. The town's location is special because on one side there is the lagoon Salzhaff and on the other the Baltic Sea. There is a marina at the lagoon side of the town and 170 m pier at the Baltic Sea beach. The St. Johannes Church was built in the 12th century.

The biggest city in Mecklenburg-Vorpommern is the Hanseatic city Rostock which is crossed by the river Warnow. There are original, beautifully restored Baroque buildings and brickwork cathedrals as well as modern architecture. Established in 1419 Rostock's University is one of the oldest of Europe.
The quarter Warnemünde is Rostock's seaside resort on the Baltic Sea coast with the maritime flair of old houses, a wide sandy beach, a lighthouse and the old fisherman port.
Every year at the 2nd weekend in August the Hanse Sail attracts more than 200 sailing vessels and over one million guests from all over the world.

The Mecklenburgische Bäderbahn Molli is a narrow-gauge steam-powered railway. It has been operating between Bad Doberan and Heiligendamm since 1886. The extension of the line to the Baltic Sea resort of Kühlungsborn took place in 1910.